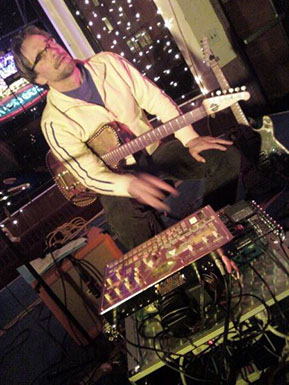 After playing in numerous bands for many years, I have discovered that only machines can tolerate my temperament. Thus, I have formed a one man band called “Primadonahue”.

A few years ago I started working nights and could not attend music rehearsals. The circumstances presented the inspiration to make a one man band.

The process of doing a one man band was clumsy at first. It was like reverting back to the level of musician I was in high school and completely relearning how to play. I started out using rather primitive techniques. My act has since progressed to include a wider variety of sonic techniques. 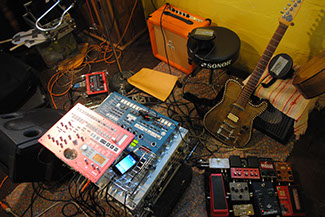 The best thing about performing with machines is that they never nix my ideas!

My critique of many one man bands I have seen is that they tend to sound like the Ramones only more primitive. I have taken the opposite approach. By using machines, I can now play more complex compositions than I could with real bands. My vision was to make musical decisions that real musicians either can't or won't play. I perform anything I can imagine without limitations... including the limits of my own ability. If a part is too hard for me to play, I can just make a machine play it.

I have performed in both a concert format or as incidental music according to the circumstance. As well as performing solo I have also been a part of some interesting collaborations.

Check out the Repulsar page to find out more about my work with Chris “Newt-Sparky-Skink” Huff and Wayne Sayers.

I have also worked with Bedlam Theatre performing in several of their Ten Minute Play Festivals and many of their Romps. In addition, I was a one man pit orchestra in Mike Harris’ production of “Big Ole Bedlam’s Theatre of the Revolutionary Arts” in February of 2006. (Read the reviews.) I also performed at the Southern Theater in April of 2006 in Bedlam's "Casablanca" as part of a Fringe Festival benefit.

The first Primadonahue album is titled Illuminati Mind Control Slave (2010). No, I'm not a pyramid worshiper. It's a statement about current pop stars and their overt use of occult symbolism. Physical CDs can be purchased from the Stucco Music Store. Downloads of the newly remixed version of IMCS are available at primadonahue.bandcamp.com/releases. $7 each! ($1 for individual tracks.)

Loosh, the second Primadonahue album, was released in late 2017. A limited edition of 50 CDs and 50 cassettes are available (unlimited digital downloads).

I was recently a guest on the Zeph Report podcast hosted by Zeph Daniel. We discussed the latest Loosh album release and an assortment of other esoteric topics.

Track 1 on Loosh. Could this song be a subtle suggestion that rock and roll is a Satanic, communist, social engineering mechanism used enslave all humanity? No. This song is not subtle at all.

Track 2 on Loosh. This is the oldest love song ever written. Extracted from the collective DNA memories of Billy Preston, Bruce Fisher, Joe Cocker, Newt Skink and myself, this is a romantic duette sung by the yin and yang properties of the non-integrated universe prior to the big bang. The computer voice sings the yin vocal arrangement to signify her status as mother of our mechanized universe.

Make Your Own Kind of Music

Track 8 on Loosh. (Loosely based on the Barry Mann and Cynthia Weil song by the same title.) Q: Why would I showcase the many failed musical innovations I have pioneered throughout the years in a Mama Cass Elliot song? A: Because I gotta make my own kind of music.

Scotch is My Bible

Track 11 on Illuminati Mind Control Slave. Some of you might remember this as a Crashdummies tune from back in the '80s. I was never comfortable playing it back then. Since I did not have a big gut, I felt that I could not do it proper justice. But now that I'm older and I actually HAVE a big gut, I can finally play it with the authenticity it deserves.

I Want You to Wanna Do What I Wantcha To Do

Track 1 on Illuminati Mind Control Slave. Inspired by the Ramones, Cheap Trick and the Cars all at once.