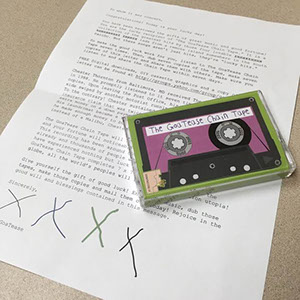 I got a surprise package from Idaho in the mail late February 2018. A new copy of The GoaTease Chain Tape on cassette arrived. There are a few notable differences between this version and the tape I found back in the 80's (and the CD).

The sound quality is much better than my first copy. It is possible that the tape I found in the 80's was a dub of a dub of a dub. This one sounds like a first generation copy and is about the same audio quality as the CD version (only analog).

It also has a longer play time. The liner notes read: "This is the definitive version of The GoaTease Chain Tape with an expanded program length that fits on a standard 90 minute cassette tape (as was originally intended)." I also noticed that there are different songs on this version and the song order has changed. And to the Shoes, for example, has moved to the first song on side two. Frampto-Dwor is nice addition as well (one of my favorites).

There also appears to be slight content edits to some of the other material. The most notable example is Ruth Buzzy Memorial Door Knob (Audiophile Edition). The original version was comprised of four scratchy records played simultaneously. The GoaTease remixed the track using digital versions of all four original songs (Gentile on my Mind by Glen Campbell and Bobbie Gentry, It’s De-lovely by Cole Porter, Cool Clear Water by Marty Robbins and Do You Know the Way to San Jose by Dionne Warwick). There is now added audio clarity without the tracking noise from the old records. You can still hear the original version with all of the glorious vinyl crackle on the Chain Tape CD version.

I now have three copies of the Chain Tape with three different play lists. Go to the downloads page for a complete list of tracks.

There are new cassette graphics that borrow from the cover concept of the CD version. I also noticed that the record label name has been changed to "FF Recordings" (same logo).

You can download everything you need here! I digitized the cassette (two WAV files of side one and side two) and PDFs of the letter and cassette graphics I got from the GoaTease Yahoo page (all on one ZIP file). For good luck, make seven copies in seven days and share them with others!